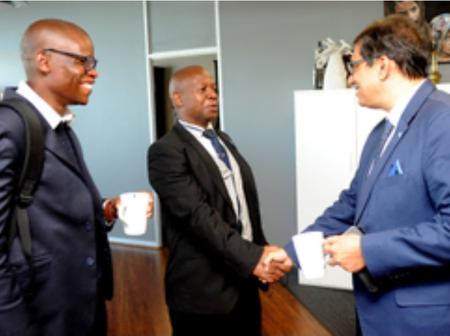 The family of the partner of Gosiame Sithole, the woman who claimed to have given birth to the decuplets, finally admitted on Tuesday that the whole thing was a sham.

The alleged father of the decuplets Tebogo Tsotetsi, is pleading with wellwishers to stop all donations.

A day after The Bulrushes reported that the story was a big lie, Tsotetsi’s family in Tembisa, Johannesburg, said: “The current uncertainties and public discourse about the decuplets is of major concern.

“The family has resolved and concluded that there are no decuplets born between Tebogo Tsotetsi and Gosiame Sithole.”

They issued an apology “for any inconvenience and embarrassment”.

This after the owner of the Pretoria News and IOL website Dr. Iqbal Survé boasted how his media titles “lead and the rest follow” – he even said he donated one million rand to the parents of the 10 babies.

The shocking climbdown came just over a week after the incredible story broke and went viral.

The braggadocious doctor and his Pretoria News newspaper editor, Piet Rampede, now prefer not to lead – they need space to investigate, so they say.

The 37-year-old mother of the imaginary decuplets has been reported missing.

Most discerning people doubted the story from the start – not to mention the dodgy picture of a pregnant Sithole – she looked like she had stuffed a continental pillow under her dress.

Now the South African National Editors’ Forum (SANEF) has stepped in to save journalism from further damage.

SANEF said in a statement that it was “outraged by the complete collapse of journalistic ethics and standards in the reporting on the case of the so-called Tembisa decuplets by Independent Media.

“On 8 June, Piet Rampedi, editor-in-chief of the Pretoria News, authored a lead story in the newspaper and on the IOL website that stated as fact that a Gauteng woman had given birth to 10 babies and broken the Guinness World Record.”

SANEF said notwithstanding the many holes in the story, Rampedi and Independent Media doubled down and continued to report the story without the basic facts having been confirmed or established.

Under pressure to prove their story was not fake news, Rampedi and Independent Media changed tack and started to blame Sithole.

On Monday they claimed she had disappeared and was not responding to messages from Tsotetsi, the alleged father.

“It is now clear that Rampedi never saw the babies or had proof of their birth, but solely relied on WhatsApp messages between Sithole and Tsotetsi to report as fact that they were born,” said the statement.

“This is reckless and irresponsible journalism of the highest order.

“And instead of admitting his lapse of basic journalistic ethics, Rampedi is now victim-blaming Sithole, who needs medical assistance, according to the head of the Steve Biko Academic Hospital.”

SANEF said the entire episode ranks as one of the lowest points in the history of South African journalism.

“The failure of Rampedi and Independent Media to do basic fact-checking and verify grandiose statements before publication has undermined and damaged the entire journalistic profession.”

The Press Code is clear that journalists should take the utmost care when reporting on matters involving children.

“Even though Independent Media is not a signatory of the Press Code, it is clear that all journalistic standards were abandoned with the handling of this story,” said the statement.

SANEF calls on the management of Independent Media to urgently institute an independent inquiry into the shenanigans.