Protests Are Just About Looting In Alex 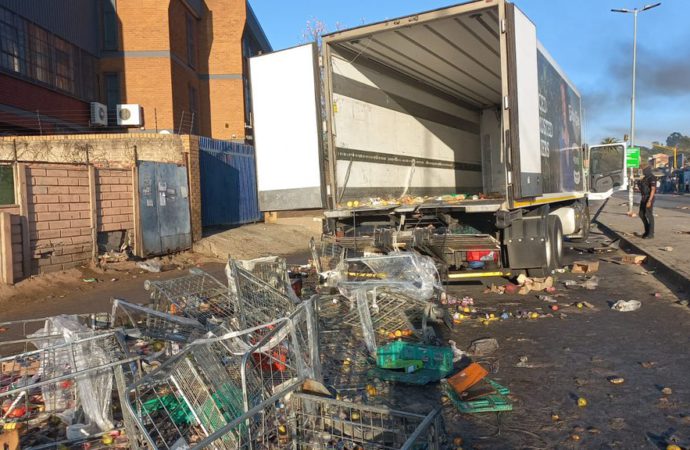 This delivery van was looted of all its contents

Alexandra Township, where protests erupted overnight, is now a sorry sight of looted and burnt shops.

With huge crowds marching in the streets, thugs among them set on closed shops in a free-for-all frenzy. Looters cleaned out shops and then set them alight.

Reports on Sunday from the township, north of Johannesburg, said shop owners were told to shut their doors before the protests started.

By late afternoon on Sunday, small children could be seen entering the burnt-out shops to try and salvage whatever was left after the looting spree.

With no police in sight a delivery van was looted of all its contents and vandalised.

Some have linked the protests to the #Free Zuma campaign that has rocked KwaZulu-Natal.

Former president Jacob Zuma is locked up at Estcourt Correctional Centre, where he is serving a 15-month prison sentence for contempt of court.

On Monday, the 79-year-old will hear from the Constitutional Court if it will entertain his plea for a remission of sentence.

Haulage Trucks have been torched and shops looted during violent protests in many parts of the province.

Police on Sunday said they had arrested as many as 67 people in connection with the violent protests that appear to have spread to Gauteng.

SABC reports indicated that some of the people who took part in the protests simply saw an opportunity to steal from shops. That was before the SABC News Crew was robbed of their camera equipment on 11th Avenue.

President Cyril Ramaphosa has warned law-breakers they will face the “full might of the law”.