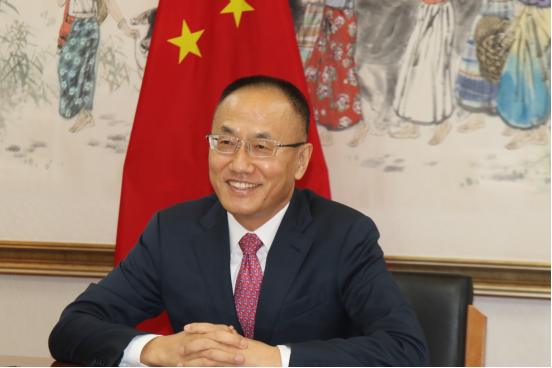 China responded strongly against the United States “slanderers” on Monday rejecting suggestions that the origins of Covid-19 have been traced back to Wuhan.

Speaking from Pretoria, Chen Xiaodong, Chinese Ambassador to South Africa, said the US was simply trying to “smear China” to cover up for its own poor response to the pandemic.

He noted that on Friday, 27 August, the US Office of the Director of National Intelligence released “key takeaways of the Summary of Assessment on Covid-19 Origins”.

US President Joe Biden also issued a statement on this matter.

“The US spared no effort to hype up the so-called Wuhan lab leak, and slander that China withholds information, refuses to cooperate and obstructs international investigation,” complained the ambassador in his virtual media address.

“These US slanders have no grounds. The US side is blatantly telling lies.”

Chen said the Chinese side opposes and condemns such moves.

“It is inherently anti-science for politicians and the intelligence community to trace the origins of viruses,” said Chen.

The ambassador said the summary has nothing new in pinning the blame on China.

“What the US has done is a witch-hunt that only looks for excuses in favor of their verdict that presumes China to be guilty. In doing so, the US holds science in contempt.

“They turn a blind eye the loss of lives. And they undermined global solidarity against the virus.

“Covid origin is a major issue of science that scientists around the world, including China and South Africa, are studying very hard.

“Today I would like to share with you all three aspects of observations on the science of origin-tracing with all the facts and the evidence.”

Chen said the “so-called Wuhan lab leak theory is full of loopholes. It is a complete fabrication”.

He said the P4 lab of the Wuhan Institute of Virology (WIV) is a China-France government project.

“It strictly follows international standards all the way from design, construction to management.

“There are strict protective facilities and measures, and the lab has been operating safely and stably since it opened in 2018.

“The local government in China got the first Covid report on December 27th of 2019. They got test samples of the first batch of Covid patients on the 30th.”

Chen said before that, the WIV had never accessed, stored, or studied the virus whatsoever.

“The Institute has never designed or manufactured the virus, not to mention to leak it,” said Chen.

“It has never conducted any coronavirus gain-of-function research. Even up till now, not a single staff member of the WIV contracted the virus.”

In March this year, a WHO team consisting of 34 experts from China and around the world did a 28-day study in Wuhan.

WHO officially released a joint WHO-China study on Covid-19 origins.

The study concluded that a lab leak was extremely unlikely.

“This has become the general consensus of the international academic community,” said Chen.

He said last year well-known experts published articles in prestigious medical journals such as The Lancet to refute the conspiracy theory of a lab leak with solid evidence.

Among them are many American experts such as NIH Director Francis Collins.

“Many findings show that the virus had emerged in many places around the world long before the the virus hit and got reported in China,” said Chen.

He said earlier positive samples are still being identified.

“For example, in November 2019, multiple skin biopsies from an Italian woman revealed the virus in situ hybridization reactivity. Genetic material of the virus has also been detected in wastewater samples collected from a city in Brazil,” said Chen.

“From December 13th, 2019 to January 17th, 2020, nine states in the US reported a total of 106 archived samples of routine blood donations that tested positive for Covid antibodies.”

The ambassador said China was open, transparent on origin-tracing cooperation.

“We have nothing to hide,” he said, adding that the Chinese side twice invited WHO in July last year and March this year for origin-tracing in China.

“During the trips, the Chinese side made every effort to organise and coordinate among relevant departments to meet the requirements of WHO experts on their visit.

“During the teams’ visits to China, the Chinese side presented all the key raw data in great detail.

“This includes patient data from 174 early cases. The foreign experts also repeatedly made it clear that the team had access to a huge amount of data and information.”

“They said that China’s openness was unexpected and the results of the Wuhan visit exceeded expectations.”

He said the first phase of global Covid-19 origin-tracing cooperation between WHO and China and its research practice provides a model for similar cooperation in other countries around the world.

Chen said the timeline of China’s Covid-19 response proves that it has no reservations about sharing information with the world.

According to international practice, it is customary for countries to have strict rules for the confirmation of infectious diseases.

Chen said China’s law on the Prevention and Control of Infectious Diseases has strict approval procedures and regulations for the reporting, verification, and release of infectious disease outbreaks.

On December 27, 2019, Dr. Zhang Jixian, Director of the Department of Respiratory and Critical Care Medicine at the Hubei Provincial Hospital of Integrative Medicine, was the first to report three cases of unknown pneumonia.

This is the first time a suspicious case was reported by a local department in China.

On the same day, the Wuhan CDC conducted epidemiological investigation and testing of relevant patients.

Chen said on 30 December 2019, the Wuhan Health Commission issued an urgent notice on reporting the treatment of the unknown pneumonia.

The next day the Wuhan Health Commission issued a briefing on the current pneumonia outbreak in the city.

On the same day, China notified the WHO Representative Office in China of information on pneumonia cases of unknown origin in Wuhan.

“Since January 3rd of 2020, China started to timely and actively share Covid information with WHO and countries including the US,” said Chen.

“From January 3rd to February 3rd, China shared with the US information about the outbreak and China’s response measures 30 times.”

The ambassador said China completed the identification and genome-sequencing of the virus on 7 January 2020, which it shared with WHO and other countries four days later.

“What I want to say as a reminder today is that from January 3rd, 2020, when China notified the US of Covid to March 13th, when the US declared a national emergency, a simple process like this took the US 70 days,” said Chen.

“I guess all of us are very clear about what the US has done during the 70 days.

“Does the US really care about origin-tracing? From the very start till now, US government leadership cares nothing about where the virus originated.”

Chen said the US wants to use origin-tracing to smear and attack China, and to increase its bargaining power..

“Their evil intentions could not be more obvious,” stated Chen..

“If the US really cares about origin-tracing, they should stop blaming others, focus on controlling the virus at home, and invite WHO to carry out investigations into the Fort Detrick base and the University of North Carolina.

RELATED: China To Speak On Covid-19 Origins In Pretoria