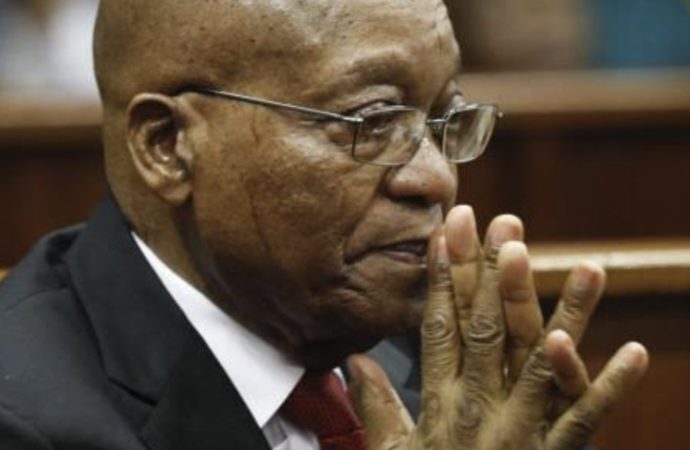 As with many of our leaders during the struggle, I believe that history will vindicate me when I say that South Africa today is in the process of changing from a constitutional democracy to a constitutional dictatorship.

After the judgment of the Constitutional Court on 17 September 2021, I am more than certain of this than ever before.

Many of our people are blind to this reality at this point because they have been successfully hypnotized by the long-standing anti-Zuma narrative.

It is perhaps convenient or even befitting for others that the laws of this country be repeatedly bent and manipulated when dealing with Zuma.

To illustrate this point in the current context I shall only cite but three examples.

Firstly, the Commission of Inquiry Into Allegations of State Capture was born out of an anomaly in that the previous Public Protector Madonsela made a recommendation that a commission of inquiry be set up to continue an investigation that she had started as her term of office was coming to an end.

This was an anomaly because the Public Protector was supposed to hand over the investigation to her successor as she did with all the other investigations of her office that were not completed when her term of office ended.

However, given that this was a case that had something to do with Zuma, a different process was followed to set up a commission of inquiry to the extent that for the first time, the presidential prerogative and powers to appoint a commission of inquiry were unilaterally usurped by Public Protector and handed to the Chief Justice.

Interestingly, the reason given at the time was that I would not appoint an independent judge, lending credence to the idea that there are some judges who are not independent.

This posture by the Public Protector was not perceived as an attack on the integrity of our judges and was instead accepted as plausible by the Judge President of Gauteng Division of the High Court.

As President at the time, I challenged this as something unconstitutional.

Judge Mlambo presided over this matter and in his judgment found in favour of the former Public Protector Madonsela’s decision of usurping the constitutional powers of the President.

I appealed Judge Mlambo judgement but when President Ramaphosa took over as president, he abandoned that appeal before it had been heard by the Supreme Court of Appeal.

This appeal was intended to overturn the overreach and violation of the constitutional separation of powers by the former Public Protector Madonsela.

Secondly, the commission chaired by judge Zondo was set up in terms of the Commissions Act of 1947.

This Act is clear on what the law is in cases of contempt of commissions.

At the time I did not oppose that application because I had a genuine belief that the judges of the Constitutional Court would not grant direct access over an issue like contempt of a commission of inquiry.

Legally and as again stated by the dissenting judgment, the Commissions Act is the primary legislation that had to be followed as it had been followed when PW Botha refused to appear before the Truth and Reconciliation Commission.

The Constitutional Court in this case somehow found it fitting to deviate from its own rules and it was again another case of the laws and the Constitution being bent and manipulated to specifically deal with Zuma.

Thirdly, once the whole contempt debacle had run its full course with judge Zondo’s subordinates presiding over a matter that had directly called into question his integrity as a judge, the Constitutional Court again made decisions and took actions that have never been taken in our law by asking that I do a mitigation of sentence where there had been no conviction.

I feel vindicated in that it still remains the contention of the minority judges that everything that has happened since then has been unconstitutional.

It has never happened that in a dissenting decision of the Constitutional Court that the dissenting judges go as far as accusing their colleagues of acting unconstitutionally.

Most astounding of all though, is how the Constitutional Court has for the first time ever stated that it does not have to consider international law as directed by Section 39(1)(b) of the Constitution.

I have been rebuked for my public comments about the conduct of certain members of the judiciary and I do not understand why.

It is my constitutional right to publicly critique judges the same way they have a right to critique me as a politician.

Freedom of expression is a fundamental right in our Bill of Rights and for that to be used against me as aggravation in imposing a sentence for civil contempt is another of the many anomalies I remain a victim of in this emerging constitutional dictatorship.

Lastly, I would like to thank the many comrades and people who have been supporting me and continue to support me in the struggle to help liberate the black African person and South Africans.

I would also like to thank my legal team as led by Advocate Mpofu SC and Advocate Masuku SC for their bravery and resolve against the most difficult legal obstacles at all times.

It is important to bear in mind that fighting these cases against me is part of the struggle to bring justice, dignity and respect for the black African.

My life has come full circle in taking me from being a herd boy, worker, trade unionist, a freedom fighter, a volunteer, a revolutionary and a soldier of Umkhonto weSizwe under the African National Congress.

I became a political prisoner for 10 years under the apartheid regime which did not care about my rights.

I understood the apartheid regime’s attitude because they were indeed my oppressors.

Now, I have been a prisoner without a trial, in a South Africa that is said to be free and respecting the rights of its citizens, where I never thought this would occur on me or anyone else.

I wear the badge of being a political prisoner with the greatest pride as the struggle for the freedom of the African against all forms of oppression, including oppression of the African by other collaborator Africans, has been my sole mission in life.

I urge all those who support me to remain resolute and steadfast in the belief that this is not the end.

I shall fight on.

Justice shall prevail. Injustice will be defeated.

We will attain true freedom and liberation for the African in the end.