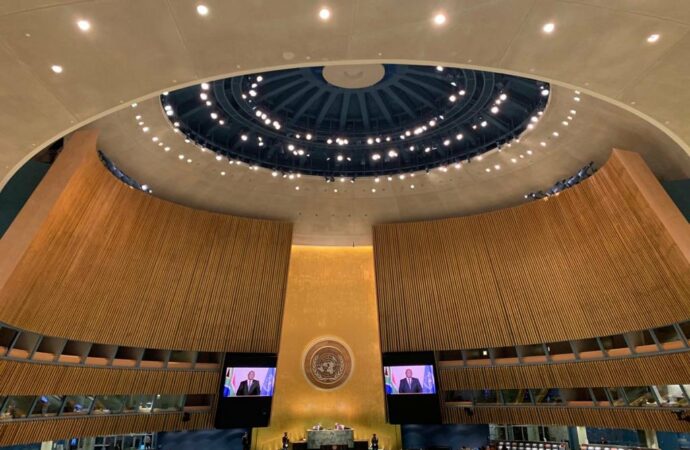 South Africa President Cyril Ramaphosa on Thursday told the 76th Session of the UN General Assembly that it was of “great concern” that the global community has not shown solidarity and cooperation in securing equitable access to Covid-19 vaccines.

“In dealing with the Covid 19 pandemic it is generally agreed that vaccines are the greatest defence that humanity has against the ravages of this pandemic,” said Ramaphosa.

“It is, therefore, a great concern that the global community has not sustained the principles of solidarity and cooperation in securing equitable access to Covid-19 vaccines.

“It is an indictment on humanity that more than 82 percent of the world’s vaccine doses have been acquired by wealthy countries, while less than one percent has gone to low-income countries.

“Unless we address this as a matter of urgency, the pandemic will last much longer and new mutations of the virus will spread and emerge,” warned Ramaphosa.

On Wednesday, US President Joe Biden pledged another 500 million jabs donation for middle and low income countries. He said the total US donation would be just over a billion vaccine doses.

The South Africa president urged all member states to support the proposal for a temporary waiver of certain provisions of the Agreement on Trade-Related Aspects of Intellectual Property Rights at the World Trade Organization to allow more countries, particularly low and middle-income countries, to produce Covid-19 vaccines.

“We need to prepare now for future pandemics and work with greater determination towards the goal of universal health coverage.”

Ramaphosa said in the wake of Covid-19 investment must be increased towards the achievement of the Sustainable Development Goals by providing low-income countries with the means of implementation.

“In this respect, the G20 Debt Standstill Initiative is a welcome response to the fiscal and liquidity challenges faced by least developed economies,” said the SA president.

“The agreement on the allocation of $650 billion in Special Drawing Rights is significant, but it is insufficient to meet the extent of the need.

“South Africa therefore reiterates its call for 25% of the total allocation, amounting to around $165 billion, to be made available to the African continent.”

Turning to climate change, Ramaphosa described it as an existential crisis for the entire world in which poor countries were particularly vulnerable.

“Although we bear the least responsibility for causing climate change, African countries are among those that carry the greatest cost,” said Ramaphosa.

“For the forthcoming COP 26 in Glasgow to respond adequately to the crisis we face, we need to see greater ambition and progress on mitigation, adaptation and the means of implementation.”

He said the pandemic has been a stark reminder of our mutual dependency, and that instability in one region of the world inevitably impacts its neighbours.

“That is why we seek to enhance the relationship between the UN and the African Union in maintaining peace, financing peacebuilding efforts, and advancing post-conflict reconstruction and development,” said Ramaphosa.

“South Africa continues with its efforts to contribute to international peace and security through our membership of the Peacebuilding Commission and our continued engagement and involvement in UN peacekeeping.”

Ramaphosa said the right of the Palestinian people to self-determination has been raised in this General Assembly for almost as long as “this body has been in existence”.

He added: “We raise it again today, not because we are bound by practice or habit to do so, but because we resolutely believe that there shall be no peace and no justice until the Palestinian people are free from occupation and are able to exercise the rights for which this United Nations stands.

“We have a responsibility, as the nations of the world, to spare no effort in finding a just, lasting and peaceful solution based on internationally agreed parameters enshrined in the relevant UN resolutions.

“We reiterate our position that the people of Western Sahara have the right to self-determination in line with the relevant African Union decisions and UN Security Council resolutions.”

Ramaphosa said South Africa further affirms its solidarity with the Cuban people and calls for the lifting of the economic embargo that has caused untold damage to the country’s economic development.

“We also call for a lifting of the sanctions that are crippling Zimbabwe and crippling its economy,” said the South Africa president.

On the decade-old matter of reforming the UN Security Council, Ramaphosa said this year marks 12 years since the start of the inter-governmental negotiations.

He said it has been 16 years since the World Summit of 2005, where world leaders unanimously agreed on early reform of the Security Council.

“We have not honoured this undertaking,” reminded Ramaphosa.

“South Africa reiterates its call for urgent reform and a move to text-based negotiations through which an agreement can ultimately be reached.

Ramaphosa said concurrent with achieving equitable geographical representation in the UN the question of gender parity must be addressed.

“Yesterday, we marked the 20th anniversary of the adoption of the Durban Declaration and Programme of Action at the World Conference against Racism in South Africa,” said the South Africa president.

“This remains the international community’s blueprint for action to fight racism and other forms of intolerance.

“We are bound by a common responsibility to fight both the legacy of past racism and the manifestation of racism in the present.

“Racism, like sexism, xenophobia and homophobia, demeans all of us.

“It undermines our humanity and stifles our efforts to build a world rooted in tolerance, in respect and in human rights.

“Let us use this anniversary to renew our commitment to combatting racism, to eliminate racial discrimination, xenophobia and related intolerances wherever they are found.”

Ramaphosa said at this defining moment, the general assembly of the nations of the world was once again called upon to inspire, guide and lead.

“The UN stands as a beacon of hope for all who dream of a better world,” he said.

“Let us, together, with the United Nations as our instrument, write a new history for humankind – one of equality, freedom, fundamental rights and shared prosperity for all.”