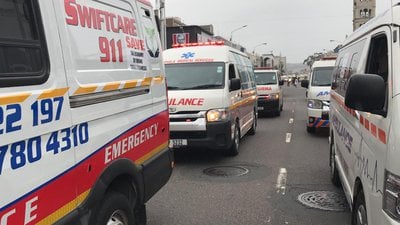 The chances of dying while waiting for an ambulance are rising as the stand-off between private ambulance services and the Road Accident Fund (RAF) continues unabated.

Struggling to deal with years of backlogs and fraud, the RAF recently introduced new requirements for claims from private ambulance operators.

The RAF now requires private ambulance operators to provide witness statements, a vehicle/or scene sketch, and a police docket for every accident they attend to and have to take patients to a hospital.

Private ambulance operators, especially in KwaZulu-Natal, say they have been trying with no success to meet RAF Regional Manager Ntsoaki Kunene to make representations about the new requirements and delayed settlements of claims.

They have warned that the stand-off will result in dire consequences if the dispute is not resolved and outstanding claims settled.

On Sunday, the standoff resulted in several persons injured in a collision between a minibus taxi and a car waiting for hours to get help.

“This morning it was reported to KZNPAA [KZN Private Ambulance Association] that an accident has happened at M37 Sunnyside near Makhutha in the South of Durban around 5 am,” said the private ambulance operator.

“The accident was between the minibus and a car.

“More than 10 people who sustained critical injuries had to wait for a government ambulance for more than two hours.

“They ended up being transported to hospital by bakkies and tow trucks.”