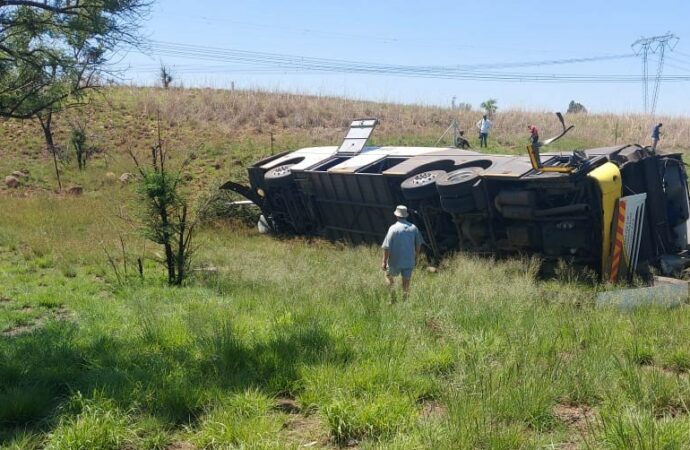 As many as 10 passengers have died and 55 others were injured in a bus crash along the N3 near Harrismith in the Free State.

The tragedy occurred close to the Tugela River on Tuesday.

Emer-G-Med paramedics and several other emergency services responded to calls for help from the crash scene.

When they arrived at the crash scene, emergency respondents found a passenger liner bus was lying on its side. It had left the highway rolling several times before coming to a rest before it reached the river.

“An on scene triage area was established by scene commanders and five passengers were found to be in a critical condition and required immediate advanced life support attention,” said Emer-G-Med.

Emer-G-Med said after the injured were treated and stabilised, they were taken by various ambulances to nearby medical facilities.

Police were on the scene and they are investigating the cause of the deadly bus crash.

Commenting on the tragedy, Transport Minister Fikile Mbalula said: “We are shocked and saddened by this tragic crash that has claimed so many lives. Many of our people depend on public transport to travel long distances across the country.

“This accident heightens their anxiety as we approach the festive season, leaving families with a heavy burden of burying loved ones lost in this tragic manner.

“I convey my heartfelt condolences to the families and loved ones of the deceased.

“We remain steadfast in our commitment to work with all stakeholders and road users in ensuring our roads are safe and those using them behave responsibly.”

Mbalula said the Road Traffic Management Corporation was sending investigators to the scene and would be conducting a thorough investigation on the root causes of the crash.