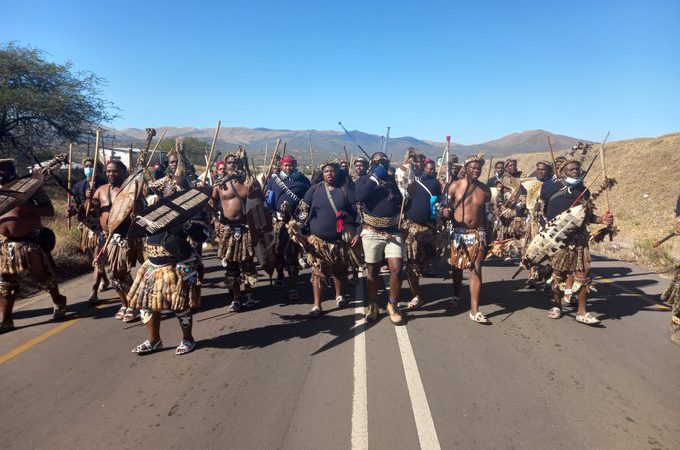 Minutes later, there was a tense standoff between police and drivers of a massive convoy from Mpumalanga that was on its way to join other supporters at Zuma’s homestead.

Zuma was convicted of contempt of court in the Constitutional Court on Tuesday and sentenced to 15 months imprisonment.

The court ordered Zuma to hand himself over to a police station within five days for processing into the prison system. Sunday was the fifth day.

Zuma’s lawyers secured a hearing with the ConCourt for Monday 12 July, but it remained unclear if the order for the former president to report to the police had been put on halt.

Police could be heard at the roadblock saying there were already too many people at the homestead.

A senior police officer said they were enforcing Covid-19 regulations that did not permit gatherings.

The stand-off was tense. Determined Zuma supporters, some in ANC regalia, confronted the police contingent of about 30 officers.

The tense stand-off lasted about an hour, before police relented and let the convoy through with an instruction that they must park their cars at a nearby school.

Mpumalanga Zuma supporters said they would walk from the school to join several hundreds of others at the homestead.

Many of the supporters were not wearing masks.

South Africa is in the throes of the third wave driven by the more deadly Delta variant.

The virus claimed the lives of renowned musician Steve Kekana who passed away on Thursday at the age of 63 and boxing legend Lehlohonolo Ledwaba.

Ledwaba, better known to his legions of fans as “Hands of Stone”, died on Friday three weeks before his 50th birthday.

A day before, 46-year-old actor Mutodi Neshehe died from the virus.

He was best known for his role as Ndalamo Mukwevho on SABC2’s Muvhango and as Zola on SABC1’s Generations – The Legacy.