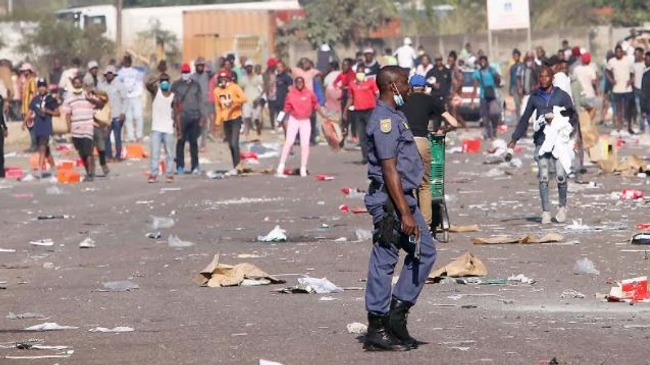 Authorities in South Africa have revised the death toll from the looting and violence upwards to 72.

In a statement released late Tuesday, the National Joint Operational and Intelligence Structure (NatJoints) said the total number of people fatalities had risen from 45 to 72.

As many 1 234 suspects have been arrested for public violence and looting, said NatJoints.

The unrest has which began in KwaZulu-Natal has spread Gauteng.

NatJoints said: “The two latest provinces to be affected, Mpumalanga and Northern Cape, have had their law enforcement officers patrolling identified areas of threat in an effort to deter possible opportunistic criminality”.

There has also been a report of two incidents in the Galeshewe, Northern Cape, where one person has been arrested.

Police are investigating the deaths reported since the beginning of the protests in KwaZulu-Natal on Friday.

The protests began as a #FreeZuma campaign before they morphed into violent destruction and looting.

In KwaZulu-Natal, there are 27 deaths being investigated by the police while the number in Gauteng is 45.

“The greater part of the inquest dockets relate to stampedes that occurred during incidents of looting of shops and malls,” said NatJoints.

“Other deaths and injuries were related to ATM explosions and shootings.”

The NatJoints has sent condolences to the family of the deceased Metro Officer Meshack Mahlangu and wished injured police members a speedy recovery.

In response to reports of armed community members retaliating against looters, the NatJoints said: “Although persons are entitled to protect their property and lives, the right to life is protected in the constitution.”