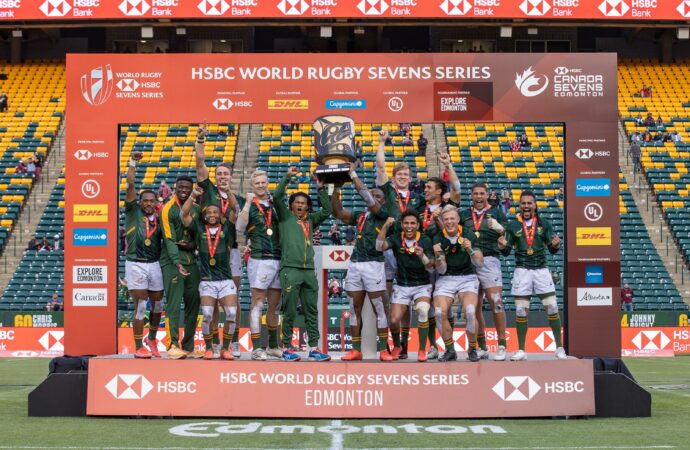 The Blitzboks clinched the overall title in style after beating Great Britain 24-12 in the final to win the Edmonton Sevens title in Canada.

Owing to the pandemic, World Rugby earlier this month announced it was canceling tournaments in Singapore and Cape Town.

The Hong Kong Sevens was also cancelled due to travel restrictions, while the Dubai Sevens was exluded from the 2021 series because of the same reasons.

This meant South Africa’s victory on Sunday came at the end of a severely depleted tournament, with heavyweight teams such as Fiji, Australia and New Zealand all not featuring.

Nevertheless the Blitzboks put on a good show to finish as the leading try and points scorers.

The Blitzboks won all the games on both weekends to finish tops as deserved champions.

The South Africans reached the final thanks to a 33-7 defeat of Kenya in the semi-final, following a comprehensive 46-0 quarter-final win over Hong Kong.

Great Britain finished second in the Series standings, ahead of last weekend’s beaten finalists Kenya, who reached the podium again in Edmonton by overcoming spirited hosts Canada 33-14 to finish with bronze.

Germany were the surprise package of the tournament, running out 24-19 winners over the USA to claim fifth place in Edmonton, following earlier victories over Great Britain, Jamaica and Hong Kong.