Israel Goes Ahead With Illegal Settlements 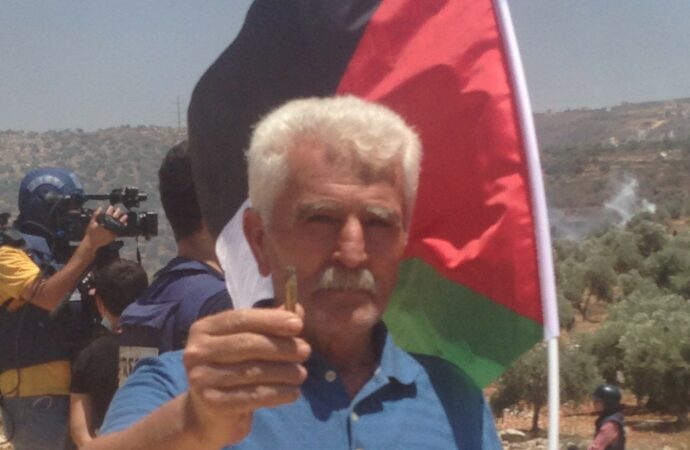 Muhammad Khabeisa protesting the illegal settlement outpost of Evyatar which was built on land belonging to his village of Beita in the northern West Bank. He is holding a bullet that was fired by Israeli soldiers at Palestinian protesters. Eight protesters from the village have been killed by Israeli soldiers.

Israel is forging ahead with a plan to promote the construction of thousands of illegal settlement homes in occupied East Jerusalem for the benefit of Israeli settlers and at the expense of Palestinians.

The first new settlement neighbourhood in East Jerusalem in 20 years, to be constructed in different parts of the occupied eastern sector.

It will comprise 1 257 housing units after receiving approval on Wednesday from the Israeli Housing Ministry.

Major settlement construction was previously frozen after political pressure from former US President Barack Obama before being unfrozen under Donald Trump’s administration.

Despite the Democrats coming to power again under current American President Joe Biden, no pressure has been exerted on the Israeli government to halt settlement construction on Palestinian land despite Washington’s support for the two-state solution.

More than 600 000 Israeli settlers reside illegally in over 200 settlements and outposts throughout the occupied West Bank and East Jerusalem.

This has effectively divided the occupied West Bank into three areas that resemble a Bantustan and make the establishment of a contiguous Palestinian state, as outlined in various UN resolutions, is impossible.

Under international law the building of settlements on occupied Palestinian land, including the West Bank and East Jerusalem, is illegal and this is why most foreign embassies are situated in Tel Aviv not in Jerusalem.

The transfer of a civilian population onto occupied territory is similarly outlawed.

Hundreds of Palestinians have been evicted from their homes in East Jerusalem to make way for Jewish settlements with hundreds more facing eviction as part of an ongoing Judaisation of the city.

Dozens of Palestinian homes have also been demolished by the Jerusalem Municipality on the pretext of being constructed without the requisite building permits.

However, Palestinians and rights groups report that it’s almost impossible for Palestinians to obtain the requisite permits while
simultaneously Jewish settlement is actively encouraged with financial incentives.

“While the Jewish neighborhoods of Jerusalem and the settlement blocs on its outskirts enjoy massive development and substantial funding, Israel goes to great lengths to prevent development in Palestinian areas,” said Israeli rights group B’Tselem.

“As part of this policy, since 1967 the state has expropriated more than a third of the land annexed to Jerusalem – 24 500 dunams, most of it privately owned by Palestinians – and built 11 neighborhoods on them, earmarked for Jewish inhabitants only.

“Under international law, the status of these neighborhoods is the same as the Israeli settlements throughout the West Bank.”

Another measure Israel has employed to limit the amount of land available to Palestinians is declaring national parks where development is almost entirely forbidden.

To date, four national parks have been declared in East Jerusalem, within the city’s municipal boundaries, including on privately owned Palestinian land or on land that lies within or adjacent to the built-up areas of Palestinian neighborhoods and villages.

This is only one of several plans being put forward by the Israeli authorities.

In December discussions concerning the establishment of another huge neighbourhood, comprising 9 000 housing units north of Jerusalem in the airport area of Atarot will be held.

Many critics assert that the two-state solution to the contracted Israeli-Palestinian conflict is now dead on the ground.