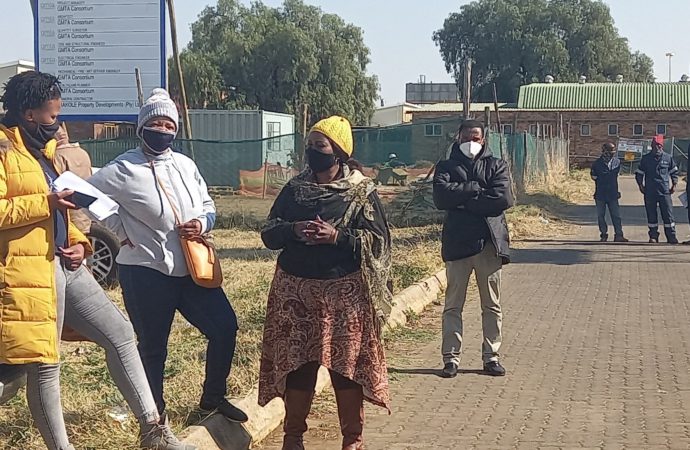 Some of the family members from Lesotho in Orkney, where they are helping to identify the 20 bodies found last week

Anxious family members from Lesotho are in Orkney, North West, taking part in the grim task of identifying 20 bodies of suspected illegal miners.

So far Lesotho authorities say they have positively identified 10 of the dead men to be Basotho nationals.

Some of the bodies were found last week on Tuesday evening outside an unused mine shaft in Lawrence Park.

Police Spokesman Sabata Mokgwabone said the rest of bodies were discovered the next day along Ariston Road, near the railway line.

The decomposing bodies were found wrapped in plastic. Some of them had name tags and telephone numbers for people in Lesotho.

North West police, with the help of their Lesotho counterparts, traced family members of the deceased and arranged for them to travel to Orkney.

On Monday the family members began the difficult task of confirming the identity of the dead men.

Lesotho officials, who accompanied the families, met with North West Premier Job Mokgoro to arrange the repatriation of the bodies that have been identified.

The dead men were thought to have been mining unlawfully when they met their demise.

“All the deceased are suspected to be illegal miners,” said Mokgwabone.

Before the bodies were found a video had been doing the rounds on social media.

In the video, a man pleads for help following what he said was a smoke inhalation occurrence at shaft number six.

Mokgwabone said the police were trying to establish if the bodies were linked to the incident alleged in the video.