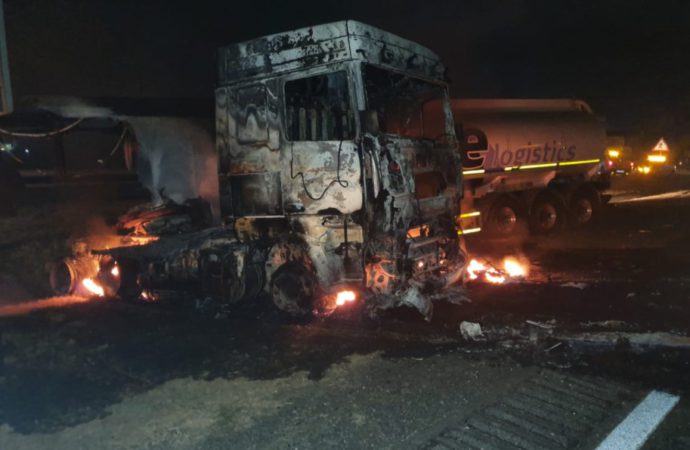 There was burning and looting all night near Mooi River Toll Plaza, KwaZulu-Natal, where at least five haulage trucks were torched.

What was supposed to be a Friday protest against the 15-month incarceration of former president Jacob Zuma turned into a violent looting spree.

Witnesses said when haulage trucks on N3 were approaching Mooi River Toll Plaza they encountered stone-throwing crowds that forced them to stop.

Drivers were forcibly ejected, assaulted, and chased away. The abandoned trucks caused a blockade on the busy highway.

By late afternoon residents of nearby informal settlements began helping themselves to the goods in the trucks.

Shops in the area, including liquor outlet Tops, were looted.

Overnight the violence got worse. Several trucks were set alight. Huge parts of the freeway were damaged by fire. Police said they had arrested seven suspects at Mooi River.

Early on Saturday morning Brigadier Jay Naiker said there were violent protests in many parts of KwaZulu-Natal. He said police arrested 17 people at Empangeni.

Naiker said police were reinforcing their numbers in trouble spots.