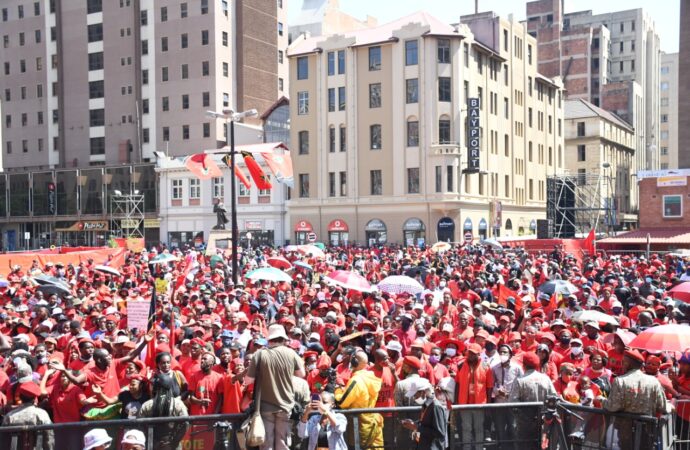 Julius Malema, the leader of the Economic Freedom Fighters (EFF) on Sunday launched his party’s manifesto focused on the poor, children, and women.

In his wide-ranging speech at the manifesto launch, Malema said his party did not make “promises” but “contracts of commitments”.

The leader of the Red Berest called on those who are better off to share their wealth with the poor.

Advocate Dali Mpofu, an EFF member, was singled out as a rich person who should be assisting a poor family in the township.

“Even myself I stay in Sandton,” bellowed Malema, “I should assist a poor family”.

He said the EFF was ready to govern and in areas where it wins there will be pro-poor and pro-women initiatives.

From ensuring that every district has a 24-hour clinic with two ambulances to converting hijacked buildings in urban areas into apartments for the poor, Malema committed to ending all the ills present today.

Street kids will be housed and educated, abused women will be sheltered and poor students will get bursaries from the municipalities without having to ask for them, said Malema.

He said EFF councilors must take the municipality to the people and make sure they work for them.

Malema said his party will monitor assistance in accessing free water and electricity provided to poor people and report back to the public at intervals.

Each EFF-controlled municipality will have an early education centre run by qualified staff. All this Malema said, would be paid for by the municipality.

Malema said EFF-controlled municipalities will fired those employed through “jobs for sex”. He said young people and women will get jobs and land.

The EFF Commander-in Chief said jobs will be available even for those without degrees.

He took a swipe at his nemesis, the African National Congress, saying “if you got your job at an ANC branch meeting you are out.”

Malema also reminded EFF members that “education was in fashion” and those who will be voted in as councillors in the 1 November local government elections will have to further their education and improve their skills.

“If you don’t have matric, you have three years to get it,” said Malema.

He said those who have matric have three years to get a post-matric qualification.

The EFF leader also spoke about the party’s achievements even in councils where they did not have the majority.

Most of the examples involved getting “corrupt” mayors being removed by EFF councilors.

The EFF also used the manifesto launch at Gandhi Square to unveil the party’s new home, the “Winnie Mandela House”.

He also slammed the Democratic Alliance calling it a “racist party” and told supporters that the EFF was the only party capable of changing the status quo.