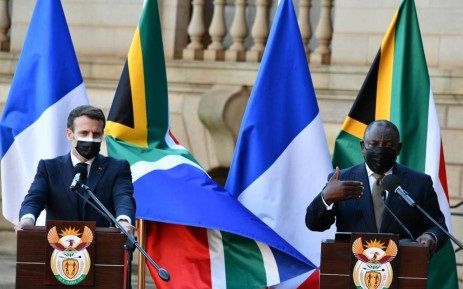 French President Emmanuel Macron continued his African safari on Friday with a visit to South Africa, where he was described by his counterpart Cyril Ramaphosa as a “champion for African causes”.

Macron had a day earlier visit Rwanda, where he acknowledged France’s role in that country’s genocide. He asked for forgiveness.
Speaking to journalists in South Africa, Ramaphosa said Macron was “brave” to visit Rwanda.

He said Rwanda President Paul Kagame had indicated a willingness to repair his country’s relationship with France.

Ramaphosa said Macron was a “friend” who “listens to us”.

The heads of state discussed the insurgency threat in neighbouring Mozambique. France stands ready to assist.

In recent years Mozambique has seen an influx of foreign energy companies fishing for lucrative contracts in the Cabo Delgado province, where massive gas reserves were discovered in 2010.

The companies that have invested in the volatile area include Anadarko, Total – which in 2019 bought Anadarko’s assets in Mozambique – ENI, ExxonMobil, BP, Shell, and China National Petroleum Corporation.

Recurring attacks by armed groups in northern Mozambique since October 2017 have forced nearly 700,000 people from their homes.

Ramaphosa said Sadc was ready to help if asked to do so, but the regional bloc respected Mozambique’s sovereignty regarding where to get help.

Access to vaccines for African countries was also discussed. Both countries support the waiver of patents to make it possible for poorer nations to manufacture the available vaccines.